The 6th European Healthcare Design Congress – the first-ever delivered virtually, owing to the COVID-19 pandemic and necessary restrictions on social gatherings – kicked off last week with a hard-hitting opening plenary looking at designing for population and planetary health within the context of climate change and COVID-19.

Dr Howard Frumkin, from the University of Washington’s School of Public Health, in the USA, took to the virtual podium to describe to delegates how human activity over the past 50 to 100 years had helped alter the planet, before explaining how these changes were having a very serious and detrimental effect on human health and wellbeing. But he also offered some hope that the health threats we’re facing could be converted into health opportunities provided the necessary action takes place.

“That activity has brought about major changes in the planet: the composition of the atmosphere has changed, the pH of the ocean is changing, tropical forests are being lost. In short, we live on a very different planet than the one our grandparents inhabited.”

Citing the work of the Stockholm Resilience Centre and its colleagues, he went on to describe the concept of limits – the notion that there is a boundary within which planetary systems stay relatively stable and human life is relatively safe. Moving beyond the boundary runs the risk of irreversible and drastic changes in Earth’s systems, he said.

In regard to biodiversity, he added, data suggests we’ve moved into this danger zone already and are in a period known as the Great Extinction, and we could be approaching this zone with land system change and the climate. When it comes to ecological boundaries there is a ‘ceiling’ that should not be exceeded, as well as a floor, when it comes to human needs, that we should not move below.

“The sweet spot in the middle has been called the ‘Safe and just space for humanity’,” said Dr Frumkin. “That is a regenerative and redistributive economy, according to Kate Raworth, the author of Doughnut Economics.”

The impacts of climate change on health are significant, from heat causing heat stress, cardiovascular failure, air pollution leading to asthma cases rising, chemical exposures leading to greater toxicity, and changes in regard to the transmission of infectious diseases. 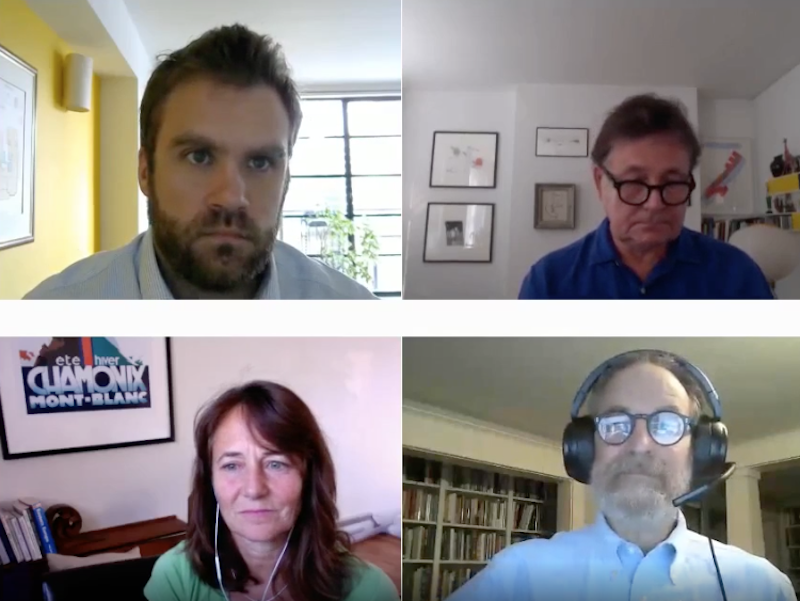 But despite the bleak picture, there is cause for optimism, and he suggested that the health threats we’re facing could be turned into health opportunities. There are health benefits to be gained through climate mitigation, and he cited three policies – clean energy, well-designed cities, and healthy, sustainable diets. Action in these areas could lead to less heart and lung disease, fewer cancer cases, better mental health, fewer cases of infectious disease, fewer injuries, and healthier child development.

Climate change and healthcare: from threat to opportunity

Dr Frumkin was followed by Dr Nick Watts, executive director of the Lancet Countdown, and chair of the NHS Net Zero expert panel, which brings together global leaders and experts in the fields of environmental sustainability and healthcare, to advise the NHS on achieving net zero emissions.

Dr Watts explained how our concept of health has become much broader as we tackle the bigger questions around human, population and planetary health.

“Our responsibility, I think, we can split into three parts,” he said. “We have a responsibility to adapt to protect our patients and the public from those effects. Secondly, we are part of the problem. . . We could transition to a low-carbon economy in a way that is quite dangerous, but we could also do it in a way that is one of the greatest global health opportunities of this century. And we have a responsibility to help the public understand that climate change is a health issue. The climate crisis is a health crisis.”

In his capacity with NHS Net Zero, he and the panel were given a simple task: to understand how quickly the NHS can arrive at net zero. And to answer this, a call for evidence was launched, which generated an enormous response.

Describing some of the principles against which the NHS needs to deliver on this agenda, he stressed that if the rest of the world doesn’t reach net zero, the NHS cannot reach net zero. “We are intimately interconnected when it comes to climate change,” he said. “So we need to take the broadest possible scope.”

The speed at which net zero can be achieved is also a key consideration. While there is a need to express urgency, Dr Watts explained, there is an equally important need to be credible and to set deliverable, feasible targets, while also maximising public health. And interim targets will also need to be set along the way in order for the NHS to hold itself accountable and to keep on track. He also underlined that this work will be “inherently unfinished, because the technology will evolve, the regulatory environment will evolve, and what we realise is possible will change”.

A report detailing the outcomes of the work of the expert panel is due out in the coming weeks, and it will cover every aspect of health and social care.

Dr Watts concluded by inviting the healthcare design community listening to assist in this endeavour.

“We desperately need your help,” he said. “Firstly, the report will set the direction, pace and scale of change, but we need help on figuring out how we go about delivering it. Secondly, we need help landing this. We need to get the links right between climate change, planetary health, and between pandemics and resilience – so we need help managing that message. And thirdly, if the NHS is going to go first and boldly to get to net zero, we need the rest of the world to quickly follow. Ideally, we need the rest of the world to compete and overtake.”

Picking up on the points made by both speakers, the third keynote presenter, Sonia Roschnik, global climate policy director at Health Care Without Harm (HCWH), placed the environmental and ecological crisis in the context of the ongoing pandemic, describing it as a real wake-up call for the need to change the way things are done.

“The reason we’ve had COVID is to do with degrading environments,” she said. “What COVID teaches us is that this is very serious, it could get a lot worse, and there is a huge amount of transformation possible in the way we do things.”

The top three polluters – the EU, the USA and China – are responsible for more than half of healthcare’s worldwide emissions (56 per cent). And if the healthcare sector were a country, it would be considered the fifth largest emitter in the world.

While the NHS has succeeded in reducing its carbon footprint by 18 per cent over the past decade, this has been achieved alongside increased activity and, according to Roschnik, is not fast enough. “The minimum needs to be a 50-per-cent reduction by 2030 across all scopes, and full decarbonisation by 2040-50. We will need every contribution from every sector to reach these targets – energy, agriculture, transport.”

She outlined a few areas where the healthcare sector should be focusing in order to reduce emissions. One is F-gases, which are used in meter dose inhalers (MDIs). These potent gases represent 4.3 per cent of England’s health and care footprint yet, according to Roschnik, they’re not clinically imperative, pointing out that Scandinavian countries prescribe far fewer inhalers of this type. Another area is anaesthetics, with Roschnik highlighting that inhalation anaesthetics account for 5 per cent of carbon emissions of acute NHS hospitals. And demand for cooling systems is also likely to increase as temperatures rise, so work needs to be done in this area to reduce the impact on the environment from the use of these systems.

Like Dr Frumkin, Roschnik underlined that COVID-19 offered a real wake-up call and opportunity to embed change. “The reality is that when we’re confronted with the need to change things rapidly, we can do so,” she said. “And what COVID has also shown us is that in most countries, there has been a dedicated requirement to look at how we support vulnerable people.”

She cited the huge problems many countries had during the first wave of the pandemic with supplying the correct PPE to protect healthcare workers, adding that it also raises the question about whether more local and shorter supply chains wouldn’t be better options. And should there be more reprocessing and resterilisation abilities, too?

“It matters to everyone the need to redesign healthcare,” she said. “A lot is to do with buildings, but how we design buildings is a lot about designing around the operational model, and how we deliver care to suit population health. We also need to focus on how we can improve health and I’d like to think that improving health will also help to improve the environment. We may be able to find several win-wins in that situation.”

This keynote session was kindly supported by Ryder Architecture.