Nature imagery has been studied extensively in healthcare environments and is recognised for its ability to elicit a positive distraction in captive populations. However, its therapeutic role has been limited to its representational or symbolic value. This paper explores multisensory imagery set in a virtual skylight framework.

The restorative impact of perceived open space
Nature imagery has been studied extensively in healthcare environments and is recognised for its ability to elicit a positive distraction in captive populations. However, its therapeutic role has been limited to its representational or symbolic value.

This paper explores multisensory imagery set in a virtual skylight framework. Such installations deliver deeper restorative benefits because they alter the observer’s perception of space. Optical illusions set in an architectural setting engage the cerebellum, often involved in spatial cognition. By engaging a part of the brain involved in depth perception, fMRI research shows that multisensory imagery induces an experience of perceived vastness in the observer, even in enclosed interiors.

A neurobiological understanding of the malleability of cognitive perception in enclosed interiors reveals a new design framework for healthcare designers. No longer beholden to the various limitations of structural space in deep-plan buildings, which include a significant number of urban hospitals, designers can create perceived open space. These illusory skylights to open skies alter the experience of patients and clinical staff, often captive in isolated treatment rooms, pre-op and post-op areas, and other clinical spaces.

This paper cites a number of neurobiology and environmental psychology studies indicating that the role environmental context plays in modulating visual cortex signal strength, which, when staged, conjures a visceral experience of vastness. New studies also indicate that our memory stores spatial reference frames – spatial relationships that map out our sense of space – that can be tapped at a neural level to create perceived open space in interiors otherwise isolated from natural surroundings.

This new design framework introduces two essential spatial relationships: the perceived zenith, and the perceived horizon line, which serve as the restorative barometer of spatial cognition. By connecting isolated spaces with perceived openings to nature, our body schema – the integrated neural representation of the body – automatically extends into the surroundings (the Relaxation Response) rather than retracting from it. Since our body schema is malleable and responds to environmental cues, multisensory imagery is able to recreate the hallmark of aesthetic architectural design: spaces that offer spatial polarity or feature prospect and refuge, panoramic vistas from a place of comfort and safety.

Given the predicted urban growth, hospitals are pressured to serve high-density populations in larger buildings. And these, by design, include areas of enclosed interiors that hamper human wellness. However, generating perceived open space provides a viable, cognitive technology to redress conventional building design. 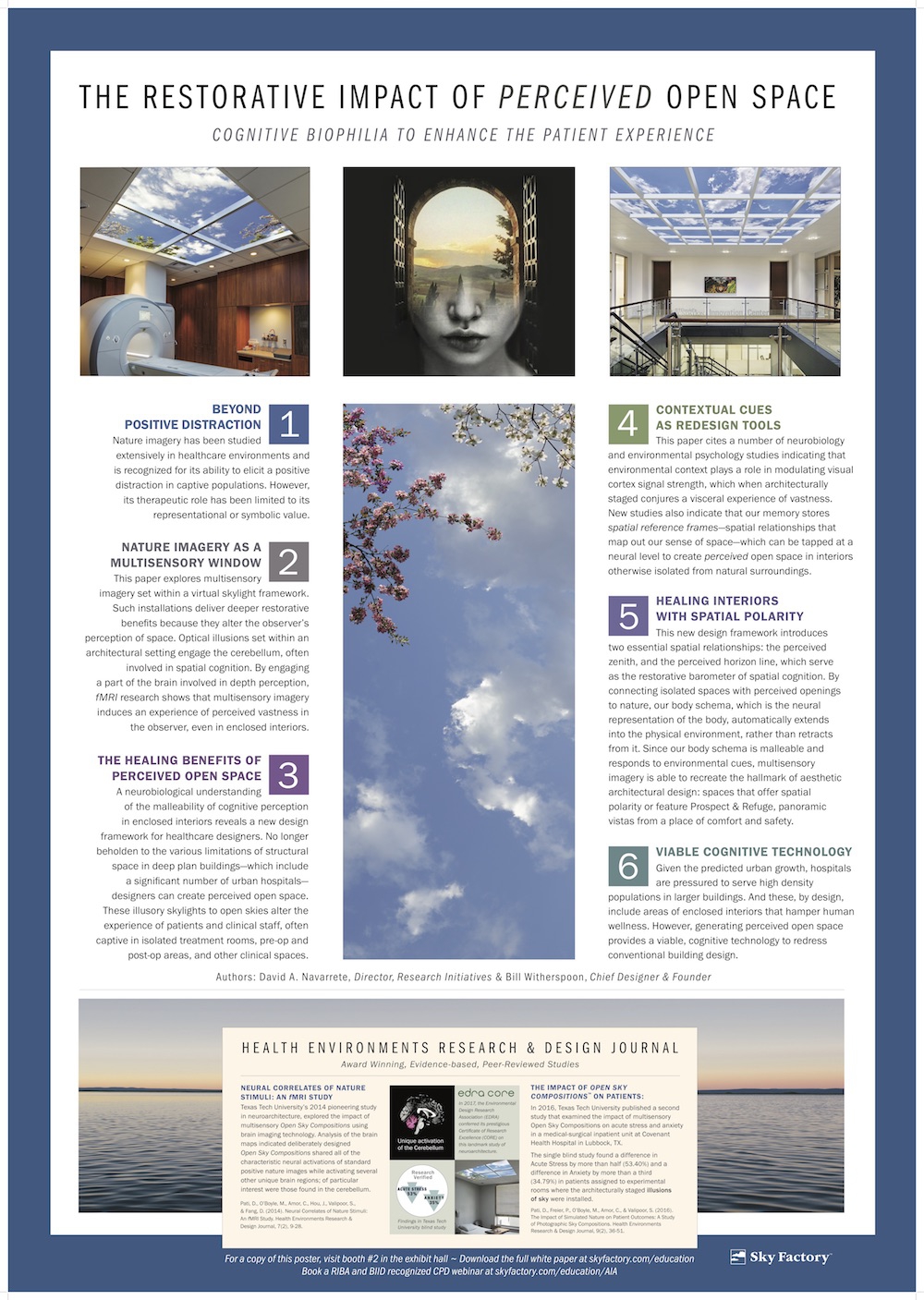